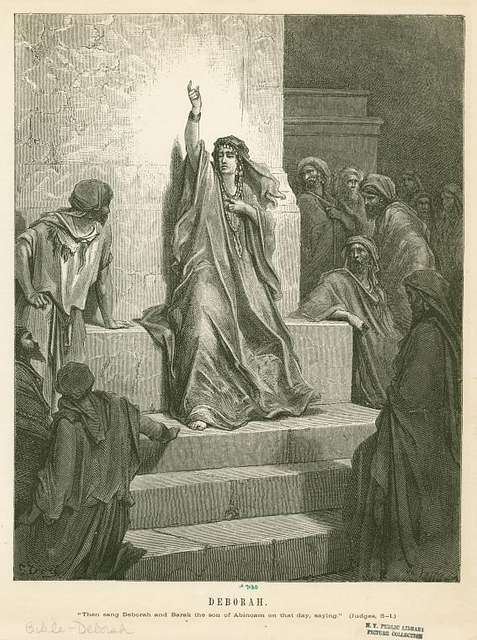 Deborah is often hailed as an example of Godly female leadership and in truth I cannot completely argue against this. However I would firstly point out that Deborah is the exception and not the rule. Secondly I would highlight a few verses from Judges 4 & 5 that may point to a better understanding.

Israel is in a bad place, they had once again departed from God and the Bible says that “again they did evil in the sight of the Lord” (Jdg 4:1) It is clear that the leaders who should have kept Israel safe had done the opposite and led the people to follow other gods (Jdg 5:8). But Deborah had not abandoned her God and remained faithful.

The first thing we notice is that once Deborah heard from the Lord she did NOT take matters into her own hands and attempt to lead the people against the Canaanites. But rather we see a praying woman, hearing from God and delivering His command, not her own.

Now she sent and summoned Barak the son of Abinoam from Kedesh-naphtali, and said to him, "Behold, the LORD, the God of Israel, has commanded, 'Go and march to Mount Tabor, and take with you ten thousand men from the sons of Naphtali and from the sons of Zebulun. 'I will draw out to you Sisera, the commander of Jabin's army, with his chariots and his many troops to the river Kishon, and I will give him into your hand.'"

It is clear from these scriptures that God’s plan was for Barak to lead the armies of Israel against the Canaanites. Nowhere in this instruction from God do we see that it was to be Deborah that was to lead (or even go) but rather Barak was. However, it was obviously Barak’s lack of trust in God’s instruction that caused him to insist that Deboarah come too.

Let’s be clear, it was not God’s plan that Deborah accompany Barak, that was all on him. One could argue that he was too weak or too afraid to do what God had commanded. Having said that, we find that Deborah, rather than refuse him, gives him reassurance but also a warning.

She said, "I will surely go with you; nevertheless, the honour shall not be yours on the journey that you are about to take, for the LORD will sell Sisera into the hands of a woman." Then Deborah arose and went with Barak to Kedesh.

This word “nevertheless” is important because it tells us that there is a consequence to his insistence on Deborah coming with him. And what is this consequence? That Barak will not get the credit for the victory - but rather that a woman will. This is obviously a prophetic utterance as of course Sisera is killed by the wife of Heber the Kenite. One might also infer from this that Deborah would be given credit and this of course would diminish the honour given to Barak.

The question is - would God have given the victory to Barak had Deborah not been there? If we take God at His word the answer is plainly, yes! So why is Deborah important? I would suggest that it was through Deborah’s prayers and ministry that the Word of God came to Barak in the first place. I would also say that the text makes it clear that in some way Barak needed Deborah at his side in order to have the faith to carry out God’s word. Although not a married couple I would observe that this is mirrored in nearly every Christian marriage - A partnership of a husband and a supportive wife. It is a principle rooted in Genesis chapter 2.

To give Deborah credit where it is due, she a) has a relationship with God such that she hears clear instruction from Him, b) she carries out what God has commanded her and doesn’t attempt to usurp Barak and c) she has enough wisdom, grace and compassion to understand that Barak needs her support but she also knows that there will be consequences.

It is interesting to note that in the book of Hebrews, when the roll call of the faithful is recounted, in the section referring to the time of the Judges, that it is NOT Deborah who is credited but Barak.

And what more shall I say? For time will fail me if I tell of Gideon, Barak, Samson, Jephthah, of David and Samuel and the prophets,

Why would the Holy Spirit deliberately ignore Deborah and give the credit to Barak? My only answer is that leadership is male and that, without doubt, although Deborah’s role is vitally important - it is Barak’s faith (albeit weak) that ultimately got the credit.