While Christians are preparing for Christmas to remember the birth of Jesus, which may or may not have been at this time of year (a study for another time perhaps) - the Jewish people are today celebrating the final day of the feast of Hanukkah. A time of eating special meals, giving gifts and lighting Hanukkah candles.

It wouldn’t be uncommon to overlook Hanukkah as being of any biblical significance, not least as you won't find any mention of Hanukkah in either the old testament or the new. Most Christians would think of it as being a purely Jewish tradition or “the Jewish Christmas”, and not think too much more about it.

However, the origins of this feast CAN be found in scripture and you will see Jesus observing it and using it as a teaching aid. So let’s take a look at what it’s all about.

The history of Hanukkah takes place during what is known as the “intertestamental period”, between the old and the new testaments, which is from the end of Malachi’s ministry up until the beginning of John the Baptist’s ministry - a period of roughly 400 years.

In 175 BC, Antiochus IV Epiphanes, a Greek king of the Seleucid Empire, took Judea and within a short time he captured Jerusalem and looted the temple. He achieved this because some political Jews had wanted his help with removing their opponents and collaborated with him to achieve their aims. He ordered all temple services stopped, outlawed the Jewish religion and even banned circumcision. To add insult to injury he sacrificed pigs on the temple altar (making the entire temple ritually unclean), set up a statue of Zeus (with Antiochus’ own facial features) in the temple and ordered the people to worship it. There were also some Jews who betrayed their God and sided with Antiochus.

A Jewish priest, Mattityahu Maccabee and his five sons began a revolt against their oppressors - They began by dealing with the traitors in their midst and by 164 BC the invaders had been driven out of Israel and the temple had been rededicated. It was during this rededication that a miracle is recorded as having taken place - The temple menorah (the seven-lamp, six-branched lampstand) only had enough oil for a single day as the Seleucids had defiled all the holy oil in the temple. It took eight days to prepare oil suitable for temple use and yet during this time the menorah did not run out of oil and the lamps kept on burning. This is why Jewish people will use a special eight branched menorah at this time of year. It is also the reason why Hanukkah is sometimes known as “The Festival of Lights”.

All of these events are recorded in various historical and religious documents (The Jewish historian Titus Flavius Josephus, the books of the Maccabees, the Megillat Taanit, the Talmud, etc) but where is it the bible?

Remarkably we find the story of king Antiochus Epiphanes (amongst others), the betrayal by some collaborating Jews and the story of the Maccabees spelled out in great detail in the latter chapters of the book of Daniel.

"Forces from him will arise, desecrate the sanctuary fortress, and do away with the regular sacrifice. And they will set up the abomination of desolation. "By smooth words he will turn to godlessness those who act wickedly toward the covenant, but the people who know their God will display strength and take action.

These are of course all prophetic visions given to Daniel by God some 350-400 years before they happened! Daniel’s prophecies are so accurate that many liberal theologians contend that this proves the historical Daniel could not have written them and they must have been written after the events. But even Jesus references these prophecies when warning His disciples about the future coming antichrist.

"Therefore when you see the ABOMINATION OF DESOLATION which was spoken of through Daniel the prophet, standing in the holy place (let the reader understand),

So Hanukkah is tucked away in some fairly difficult prophetic writings in the old testament. But if you dig into them you discover this historical event laid out in great detail. Later in the new testament we find Hanukkah again, and again it is somewhat concealed.

At that time the Feast of the Dedication took place at Jerusalem; it was winter, and Jesus was walking in the temple in the portico of Solomon. The Jews then gathered around Him, and were saying to Him, "How long will You keep us in suspense? If You are the Christ, tell us plainly."

What is this “Feast of Dedication” that Jesus is in the temple for? You won’t find it listed among the other Hebrew feast days and Holy days - so what is it? It is the remembrance feast of how the Maccabees defeated Antiochus and rededicated the temple to their God. How do we know? The word “Hanukkah” is a derivative of the Hebrew verb meaning “to dedicate” and also it clearly says it is winter, none of the other feasts take place during winter but we know that the rededication of the temple is celebrated on the 25th of Kislev, roughly between the end of November and the end of December.

It was during these eight days of Hanukkah (or festival of lights) that Jesus teaches about himself as being “the Light of the world”, he deals with godless Jews who act wickedly toward the covenant, teaches about good shepherds and wicked ones - All these themes echoing the historical events surrounding Hanukkah, all taught from the very temple that the Maccabees had purified and rededicated and at the very time of year that the Jews gathered there to remember it.

There is much to learn from Hanukkah - a great deal of which is very relevant to the days that we are living in. It also has much to teach us about the last days, the antichrist, the great falling away and other prophetic future events.

It teaches us how during times of persecution and deception we who have understanding are to help others to understand the days that we are living in but may pay a price for it.

"Those who have insight among the people will give understanding to the many; yet they will fall by sword and by flame, by captivity and by plunder for many days.

But ultimately it teaches us that in dark days there is a light, the true light of the Messiah. There is the inexhaustible supply of oil that we find in the Holy Spirit, so that our lamps, the illumination of God’s word, will not go out. And that there will come a day in the future when the temple, God’s Church will be purified. 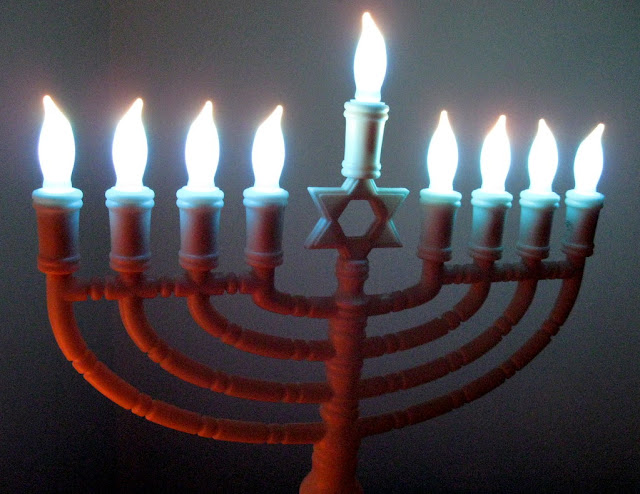