Have You Seen This?

Have You Seen This? 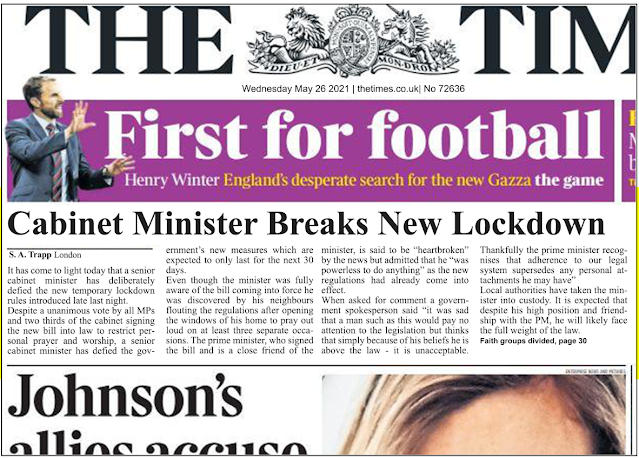 It has come to light today that a senior cabinet minister has deliberately defied the new temporary lockdown rules introduced late last night.

Despite a unanimous vote by all MPs and two thirds of the cabinet signing the new bill into law to restrict personal prayer and worship, a senior cabinet minister has defied the government’s new measures which are expected to only last for the next 30 days.

Even though the minister was fully aware of the bill coming into force he was discovered by his neighbours flouting the regulations after opening the windows of his home to pray out loud on at least three separate occasions. The prime minister, who signed the bill and is a close friend of the minister, is said to be “heartbroken” by the news but admitted that he “was powerless to do anything” as the new regulations had already come into effect.

When asked for comment a government spokesperson said “it was sad  that a man such as this would pay no attention to the legislation but thinks that simply because of his beliefs he is above the law - it is unacceptable. Thankfully the prime minister recognises that adherence to our legal system supersedes any personal attachments he may have”

Local authorities have taken the minister into custody. It is expected that despite his high position and friendship with the PM, he will likely face the full weight of the law.

You’d be forgiven for thinking that this was a genuine article as it reads like it could have been taken from any one of our daily news outlets - But in fact it is a modern-day paraphrase of the first half of Daniel chapter 6 (I did give you a clue... S. A. Trapp?) - I would urge you to please go ahead and read Daniel Ch 6 before continuing!

Whilst studying the chapter this week I was struck by the thoroughly modern themes it contained: Governments conspiring against religious freedoms, backroom deals, political back-stabbing, manipulation of leadership, temporary restrictive measures and harsh fixed-penalties for breaking hurriedly enacted new laws.

If, eighteen months ago, I had said that the government would be introducing new laws that would prevent us from coming together to worship The Lord, most people would have thought I was either a crackpot or a conspiracy theorist; but certainly not a prophet as they only tell us good news (don’t they?) Yet here we are. What’s more I think that very few of us would disagree with the reasons behind the restrictions. They seem to us to be very sensible, science based and after all they were only temporary(?) Thankfully we have started to see some of the measures begin to lift in recent months.

However the things that strike me most are firstly, just how quickly the measures were introduced (just like in Daniel), secondly how initially we all thought the measures would only be in force for a short period of time (just like in Daniel) and lastly how compliant we all were going along with them (not like in Daniel). Don’t get me wrong, I’m not advocating civil disobedience - I think our reasoning was very “Christian” - a good witness to our communities and thinking of others before ourselves. But look at what Daniel did:

"All the commissioners of the kingdom, the prefects and the satraps, the high officials and the governors have consulted together that the king should establish a statute and enforce an injunction that anyone who makes a petition to any god or man besides you, O king, for thirty days, shall be cast into the lions' den. "Now, O king, establish the injunction and sign the document so that it may not be changed, according to the law of the Medes and Persians, which may not be revoked." Therefore King Darius signed the document, that is, the injunction. Now when Daniel knew that the document was signed, he entered his house (now in his roof chamber he had windows open toward Jerusalem); and he continued kneeling on his knees three times a day, praying and giving thanks before his God, as he had been doing previously. Then these men came by agreement and found Daniel making petition and supplication before his God.

He knew exactly what the consequences would be if broke the law. Daniel could have taken any number of very “reasonable” steps to avoid breaching the rules (or at least being caught doing so). He could have closed the windows, prayed silently or he could have simply complied with the edict as it was only going to last 30 days anyway. So why didn’t he? Well, simply that he put worshipping God before man’s laws. More than that, he saw his own life as inconsequential in the light of worshipping his God.

How Blessed Are We?

Personally I believe that we were right to obey the restrictions placed on us over the last year but I also believe that this was a massive wake up call for the Church. We have witnessed how spiritual restrictions can be disguised in (apparently) benevolent legislation that seem to everyone else to be the right thing to do. We have been given a glimpse of just how fast things can change and how fragile our Christian freedoms are, even in this country. Let’s not forget that the liberty we have here, now, is an historical and geographical anomaly. Throughout history believers in Jesus have continually faced opposition, restrictions, persecution, legal prohibitions and even death for simply acknowledging that Jesus is Lord. Even today millions of our brothers and sisters face exactly the same challenge that Daniel did in countries such as Saudi Arabia, North Korea, Pakistan - or even (as we’ve learned from Soloman Nathaniel) in semi-westernised countries such as India. Recent studies show that around the world tens of thousands of Christians are killed every year for simply being Christians.

The bible teaches us that in the last days we will face much worse than we have had to deal with over the last year or so. Like Daniel, many of us will no doubt face choices where we must decide between the word of God and the laws of men, between Jesus and the world.

"But before all these things, they will lay their hands on you and will persecute you, delivering you to the synagogues and prisons, bringing you before kings and governors for My name's sake.

"Behold, I send you out as sheep in the midst of wolves; so be shrewd as serpents and innocent as doves. "But beware of men, for they will hand you over to the courts and scourge you in their synagogues; and you will even be brought before governors and kings for My sake, as a testimony to them and to the Gentiles.

Let’s not forget that in chapter 3 of Daniel only “some” Jews refused to obey Nebuchadnezzar's command to worship the golden image, from which we can infer that “most” did.

"There are certain Jews whom you have appointed over the administration of the province of Babylon, namely Shadrach, Meshach and Abed-nego. These men, O king, have disregarded you; they do not serve your gods or worship the golden image which you have set up."

My prayer is that God, in His mercy, will give us the grace to stand in difficult times. To take shelter in our strong tower and to rest under His wings. Even if things get really tough let’s take Shadrach, Meshach, Abed-nego and Daniel as our examples and remain in His Word:

"Now if you are ready, at the moment you hear the sound of the horn, flute, lyre, trigon, psaltery and bagpipe and all kinds of music, to fall down and worship the image that I have made, very well. But if you do not worship, you will immediately be cast into the midst of a furnace of blazing fire; and what god is there who can deliver you out of my hands?" Shadrach, Meshach and Abed-nego replied to the king, "O Nebuchadnezzar, we do not need to give you an answer concerning this matter. "If it be so, our God whom we serve is able to deliver us from the furnace of blazing fire; and He will deliver us out of your hand, O king. "But even if He does not, let it be known to you, O king, that we are not going to serve your gods or worship the golden image that you have set up."

Remember that both in the fiery furnace and in the lion's den, it was The Angel of The Lord (I believe a Christophany) who went through the trial with them - notice He didn’t deliver them from the time of testing, didn’t prevent Shadrach, Meshach, Abed-nego from being thrown into the fire or took Daniel out of the Lion's den - but rather He went through it with them and kept them safe. Above all, even if we were to face death, we know that...  “In the future there is laid up for me the crown of righteousness, which the Lord, the righteous Judge, will award to me on that day; and not only to me, but also to all who have loved His appearing.”

The angel of the LORD encamps around those who fear Him, And rescues them. O taste and see that the LORD is good; How blessed is the man who takes refuge in Him! O fear the LORD, you His saints; For to those who fear Him there is no want.

But we have this treasure in earthen vessels, so that the surpassing greatness of the power will be of God and not from ourselves; we are afflicted in every way, but not crushed; perplexed, but not despairing; persecuted, but not forsaken; struck down, but not destroyed; always carrying about in the body the dying of Jesus, so that the life of Jesus also may be manifested in our body.

When the Lamb broke the fifth seal, I saw underneath the altar the souls of those who had been slain because of the word of God, and because of the testimony which they had maintained; and they cried out with a loud voice, saying, "How long, O Lord, holy and true, will You refrain from judging and avenging our blood on those who dwell on the earth?" And there was given to each of them a white robe; and they were told that they should rest for a little while longer, until the number of their fellow servants and their brethren who were to be killed even as they had been, would be completed also.

"Be strong and courageous, do not be afraid or tremble at them, for the LORD your God is the one who goes with you. He will not fail you or forsake you."